Been a Long Time. Nice to be back in leather.

I would say it has been an odd couple of weeks since I last posted but that is probably not correct.  It has been a typical central Scotland summer so far.  Very mild, very wet with fairly high winds.

Taking a week off work to go camping I dug out the soft luggage to see if it would fit on the Cagiva without melting or catching fire.  Having looked at the cost of solid cases, jeesh, they will not be happening (I could buy a project bike for that). I managed to lash them securely and high enough to keep them off the pipes whilst still getting into the pillion seat.  Sadly just before I finished packing the rain came on so heavily there was no visibility and the road washed off.  Not one to be put off camping but not wanting to share my very limited space with wet bike gear I changed plan.  Checking the weather forecast I picked a new destination, packed the car and off we went for a few days.

This plan worked a treat and we spent three days in Dumfries and Galloway under amazingly blue skies being real tourists and loving it.  Knowing after a few days the weather was to improve at home we packed up and returned home to spend some time on a motorbike.

Map out it was time to pick a reasonable route, which bike and what gear to wear?

Deciding on the Fazer I picked a route that would take us over the Kincardine Bridge to Perthshire via Fife or any other region that got in our way. The aim of the trip was to visit Drummond Castle Gardens near Crieff. Now what gear to wear, considering the Scottish summer?  Having avoided my leathers for a season or two I thought I would give myself a wakeup call and try them on to see how much weight I had to lose.  Oh my, a favourite old boots moment.  They slid on like those down trodden, well-worn docs you should have thrown out years ago but love.  Decision made it was a leathers day, let’s hope the weather would hold.

Having a quick squint at a map, off we set.  As usual whenever we ride over the Kincardine Bridge we can never find the route we want but who cares.  Let’s make our own.  One of the things I had forgotten about wearing my leathers was that drinking any liquid was not a good idea before a ride. Where they bend they flex in in a way that leans on my bladder. Thirty minutes in and I was bursting.  I knew that where we were was not far from Knockhill and one thing that’s there are plenty toilets.  Riding on following signs for the track it suddenly appeared on our right.  How great is my geography that I was expecting it on left?  Now we have another road to Knockhill.  Checking out the track there were some guys trying their race car skills so we watched for a bit and then rode on, aiming in the rough direction of Crieff.

The only thing I could guarantee was that we were riding north and keeping the Trossachs in the distance on our left, other than that I had no idea where we were.  The countryside was beautiful and the road was quiet and winding.  Slowly the land started to ascend and the woods thinned out taking us into Glendevon where the summit provides views across the large basin that holds Gleneagles and Perth framed by the edges of the Trossachs and further north the Cairngorms in the very distance.  Even the field in the glen are lovely, ancient dykes pattern them and it’s clear from the lumps and bumps that there are even older remains of walls under the grass.

Riding down from Glendevon (which at the time we didn’t know we were in) I got a surprise, we rode right through Gleneagles. The course looks very impressive with amazing manicured fairways and massive dune like banks and bunkers.  The nearest to golf I normally get is walking dogs at night over a local course. Leaving here the road then leads you past the equestrian area where lots of young riders were receiving instruction and coaching on cross country style jumps.

Still following signs for Crieff, when they existed, we were just leaving Muthill when a sign for the gardens we were looking for appeared.  Taking a left turn we rode along what I can only describe as the most incredible tree lined drive. (This is not my image) 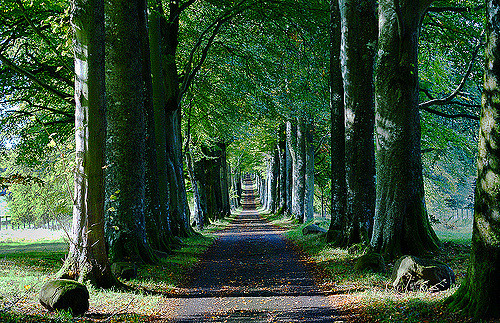 It is over a mile long, raised above fields either side with mature trees it’s full length and eventually a wall of rock on your left as you appear at the side of the castle.  As we were late in arriving we decided not to pay for the gardens on this occasion but having been here before I can recommend that they are well worth the visit.  They can only be described as very special.

We did park up for a break, it was a really hot and dry day so being able to peel out of your jacket and helmet for ten minutes or so war a relief.  However if you do decided to visit the gardens be aware that the gravel in the carpark is rather deep.  As we had parked nose first on a very slight incline it created a bit of hilarity with a bus load of tourists.  As Andrew tried to push back with his feet to reverse the bike all that happened was that his feet slid deeper into the gravel and the bike went nowhere.  Not unfamiliar with pulling a bike backwards out of a spot I wasn’t any more help, eventually with his feet on the rail in front for leverage we managed a 49 point turn only to find a tourist wanting our photo.  As we had our helmets back on at the time it wasn’t a problem.  Some of them even waved us off.  The drive out of the castle is nowhere near as impressive but at least it means there are no problems with passing places.

The return journey was fairly uneventful, the only thing of note is a very peculiar junction not far from Dollar that frankly scared the shit out of me.  Good job I wasn’t riding I’d have to have stopped before it to figure it out.  It was sort of a junction on a junction that gives the impression that you are on the wrong side of the road.  Not nice, but at least I can say the ride on the whole was superb and one that will be repeated soon, with a packed lunch and plenty of time to take in the gardens. (So long as we can retrace our steps on the other side of the Kincardine Bridge).